How to Switch to Clean Energy in Maryland, DC and Virginia 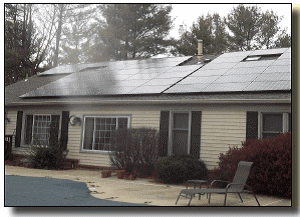 Installing solar panels on your rooftop is one way to directly access solar energy. Geoff Mirkin, CEO of solar panel installer company Solar Energy World, estimated that purchasing and installing panels upright can cost $30,000 to $40,000 depending on the number of panels and the amount of sunlight that lands on the roof. Mirkin said that banks have increasingly allowed homeowners to finance their panels through 5-year, 10-year and even 20-year loan payment plans.

Switching from coal and fossil fuels to clean energy sources can be a hard task. But in recent years, Maryland, D.C. and Virginia have passed legislation to make it easier for residents to make the leap. Here are a few ways you can access clean energy for your home.

What Deregulation Means in Maryland and D.C.

In Maryland, residents can decide which utility company or energy supplier they want to subscribe to. Deregulation of the state’s electric utilities came after the General Assembly passed the Electric Customer Choice and Competition Act of 1999. The utility market in Washington, D.C., was deregulated shortly after in 2001. So instead of having to get electricity from one of Maryland’s or D.C.’s major utility companies, customers can instead obtain energy directly from a clean energy supplier.

Climate change is changing pollen production patterns and impacting everyone with seasonal allergies. Take a deeper look at the problem and see what you can do to help fight off the coughing and sneezing.

In Maryland, hydroelectric and solar energy are the primary sources of all of the state’s renewable energy, according to the U.S. Energy Information Administration. Renewable energy experts say, however, that of the two, solar energy is the only one that residents can directly access.

In D.C., solar energy is also the primary source of renewable energy, with no hydro or wind energy, according to U.S. Energy Information Administration.

Installing Solar Panels
Installing solar panels on your rooftop is one way to directly access solar energy. Geoff Mirkin, CEO of solar panel installer company Solar Energy World, estimated that purchasing and installing panels upright can cost $30,000 to $40,000 depending on the number of panels and the amount of sunlight that lands on the roof. Mirkin said that banks have increasingly allowed homeowners to finance their panels through 5-year, 10-year and even 20-year loan payment plans.

Homeowners who have purchased their solar panels are also able to claim a 30% federal tax credit, according to the Internal Revenue Service’s website. Mirkin added that some Maryland counties allow residents to claim property tax credits, as well.

Maryland and D.C. residents can also collaborate to get competitive pricing for solar panel arrays to install on their own property. Advocacy group Solar United Neighbors features local co-ops in 10 states on its website.

There are other alternatives for people who do not want to shell out thousands of dollars for a solar panel array. Mirkin said that many companies allow residents to lease solar panels using a contract called a power purchase agreement (PPA). With a PPA, Mirkin said, homeowners do not have to pay upfront for the installation or the panels. Instead, customers who’ve signed the agreement pay either a monthly fee for the panels or they only pay for the energy they’ve used from the panels.

Mirkin added that PPAs can lock in the price of electricity for up to 25 years, which means the homeowner will pay the same rate for the contract’s duration. Electric rates generally increase over time, so the cost of electric is overall cheaper now than it would be in 25 years, Mirkin said.

David Murray, the executive director of the Maryland-D.C.-Delaware-Virginia Solar Energy Industries Association, said PPAs also provide additional opportunities to save money in a process called net-metering. If the homeowner has used less energy than the panels produced, money will be subtracted from the customer’s utility bill, Murray said. If the resident has used more energy than the panels produce, a charge will be added to the bill.

But Murray warned homeowners that because their homes are still connected to the electrical grid, they still have to pay their utility company a flat fee for using the company’s equipment, like poles and wires. Scanning through the electric utility tariffs for the companies listed on the Public Service Commission’s website, you’ll find that the flat service charge can range from $7.90 to $26.70 per month for residences. This fee does not reflect other standard charges accrued monthly that depend on how much energy you’ve used and the season.

And despite what some solar installers claim, Sierra Club Virginia’s Clean Energy Chair Ivy Main noted the only way to get 100% of your energy from solar energy all the time — even at night when there is no sun — is to install a battery that can store surplus energy, like a Tesla Powerwall.

“If you’ve net-metered, if you have solar panels but you’re tied to the grid, you’re running on renewable energy directly for the time the sun is shining, you’re supplying the surplus onto the grid and you get credit you can draw on later,” Main said. “Those people aren’t really running on 100% solar unless they’ve got battery storage.”

Community Solar: A Solar Panel-Less Alternative
PPAs and solar panels, however, aren’t the best route for everyone. Murray said people who can’t put panels on their roofs — either because there’s not enough sunlight or they’re leasing their home — or don’t plan to live in their home for 25 years can participate in Maryland‘s and D.C.‘s community solar programs. Maryland and D.C. established their programs in 2016.

Consumers can switch to solar energy and participate in community solar programs through local utility companies like Baltimore Gas and Electric, Potomac Electric Power Company, Delmarva Power and Potomac Edison/First Energy Corp. The utility companies can then connect their members to third-party providers like CleanChoice Energy, Neighborhood Sun, One Energy and Turning Point Energy. Some of the providers, like Neighborhood Sun, only offer solar, while others like CleanChoice Energy market a combination of solar and wind energies.

Neighborhood Sun Marketing Manager Emily Tokarowski said most third-party providers guarantee that customers can get solar power at a cost 5% lower rate than their utility bill. Tokarowski also noted that Neighborhood Sun offers additional discounts of up to 25% for low- to medium-income residents.

Depending on the provider, however, not all of the energy you need to power your home can come from the third-party provider. For example, Tokarowski said the amount of energy a subscriber gets from the company’s arrays can range from 70% to 90% depending on the season, the amount of sunshine and the number of subscribers a solar project has.

[Maryland’s community solar program was initially supposed to end this year, so new solar array projects could not enter the program. A bill extending the program until 2024 is going through Maryland’s General Assembly.]

Virginia’s Pilot Programs
Because Virginia is still a regulated utility state, unlike Maryland and D.C., the best way to get direct access to solar energy is through buying panels outright, according to Ivy Main, the Sierra Club Virginia chair.

For Virginia residents who can’t go that route, there is some hope.

One of the state’s main utility companies, Dominion Energy, was approved for a community solar pilot program similar to the Maryland and D.C. programs by the Virginia State Corporate Commission in September 2018, according to Dominion’s website. This pilot would allow users to obtain solar PPAs, which Main said are currently not permitted in Virginia.

For Dominion customers who want 100% of their energy to come from renewable sources, their bill will see at least a $20 increase, according to the company’s website.

Dominion spokesperson Daisy Pridgen confirmed that Coronal Energy is one of the third-party solar providers participating in the program. Pridgen said Dominion is currently looking for locations to construct the solar arrays.

Dominion also has a renewable energy pilot program, which started in 2013 and through which subscribers can enter into agreements with third-party renewable energy providers. The program’s website said the energy must come from wind or solar generators on the homeowner’s property.

Main, however, said that customers who participate in this program are still getting their energy from coal and fossil fuels. Most of Dominion’s renewable energy is sourced from hydroelectric, biomass, thermal, municipal solid waste and landfill gas sources, according to the utility’s 2018 report to the State Corporation Commission on Renewable Energy.

Arcadia Power CEO Kiran Bhatraju said consumers should remember “they have a choice and they should act on it.”

You can find more information on going solar and community solar projects in your state at https://www.solarunitedneighbors.org/.