A Long Awaited Move Toward Solar Power Has Excellent Results

After many years of research, the Donohew family of Gaithersburg, Maryland, is now taking action to combat their rising energy bills. 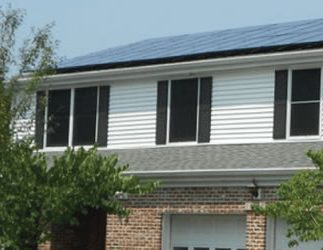 Eliminates $2,000 per year in energy costs
Earns $3,400 per year from Solar Renewable Energy Credits
Saved $27,575 in government incentives
Will realize ROI in less than 5 years
Reduce CO2 emissions by 18,147 pounds per year

“I’m very happy with my solar PV system. I’ve been telling everyone about how all this works and what my return on my investment is.”

Ten years ago, Mr. Donohew received estimates from multiple solar companies but at the time was discouraged by the appearance of the solar panels.

The time was right and the pieces came perfectly together for the Donohew family. Now, with SunPower’s attractive all black solar panels Mr. Donohew went solar and choose Solar Energy World to design and install the system. The system that was installed is a 9kW rooftop solar electric system that includes 40 – 225 watt solar panels. After the federal tax credit, state grant, and local property tax credits, Mr. Donohew expects the $60,175 solar PV system to cost them about $32,600.

In addition to government incentives, the Donohew’s will be saving $2,000 per year on their electricity bills and earning an estimated $3,452 per year by selling their Solar Renewable Energy Credits; estimating their PV system would pay for itself in less than 4 ½ years.

Powering up Mr. Donohew’s system has also reduced their carbon footprint, with a carbon offset of 13.8 metric tons equivalent to the 12,000kwh produced per year from his system. Within the same year the system takes the annual greenhouse emissions from 3 passenger vehicles off the road or saves the CO2 emissions from 1,547 gallons of gasoline consumed.

Once the solar panel system was installed on their Maryland home, the Donohews brought Solar Energy World back to complete an Energy Audit. The Donohews discovered that there was more they could do hand-in-hand with solar energy to become more energy efficient. With small and low cost fixes the Donohew household would be able to be more energy efficient during the cold season, when energy costs tend to be the highest, reducing their energy bills even further.