With a backdrop of high energy prices, concern over global warming and a growing desire to achieve energy independence, the Blackwell household in Bowie, Maryland, set out to make a monumental change. 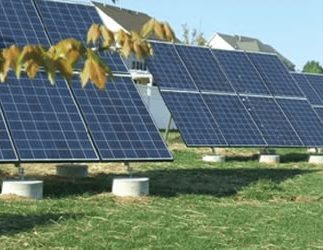 Eliminates $2,471 per year in energy costs
Earns $4,435 per year from Solar Renewable Energy Credits
Saved $34,877 in government incentives
Will realize ROI in less than 6 years

“I love my solar energy system. Besides having a warm fuzzy feeling when I think about going green, there are so many benefits to home owners that it almost seems ridiculous not to look into solar energy”.

After disappointing conversations with BGE, The Blackwells started with one simple step – a Home Energy Audit. The audit recommended that they install ENERGYSTAR qualified CFLs (compact fluorescent light), unplug energy draining appliances, use a power strip so they could easily turn off electronics when they were not in use plus other energy saving initiatives. But, it just wasn’t enough.

With a renewed desire to cut back, The Blackwells were motivated to reduce their electricity bill further when reviewing their annual electricity costs, a steep $7,550 per year.

The Blackwells reside in a large single-family home built in 2006 in Bowie, Maryland. The two-story home is occupied by 3 adults and sits upon an approximate 40,000 square foot lot. So, with available space, the Blackwell’s explored the use of ground mounted solar panels to reduce their energy costs.

After contacting Solar Energy World, LLC in the fall of 2009 – the solar analysis showed that it would pay to go solar. The Blackwells opted for a 10.32kW solar electric system that includes 48 – 215 watt ground mounted panels. After the solar tax credit, state grant and local property tax credits, the Blackwells expect the $74,450 solar panel system to cost them $39,573.

Powering up the Blackwell solar panel system has also reduced their carbon footprint, with a carbon offset of 865lbs. Within the same 10-day period the offset equivalent of planting 10 trees, saving 45 gallons of gas, and taking 26 cars off the road for a day. A carbon offset is a financial instrument aimed at a reduction in greenhouse gas emissions, which are measured in metric tons of carbon dioxide-equivalent (CO2e) and represents six primary categories of greenhouse gasses.