Solar panels can handle almost any storm! And when combined with battery storage, they can keep your essential appliances up and running when you need them most.

By Lisa Rimmert   Re-posted with permission from Solar United Neighbors.

In our decade-plus of working with solar homeowners, we’ve seen countless solar success stories even in the most devastating storms: 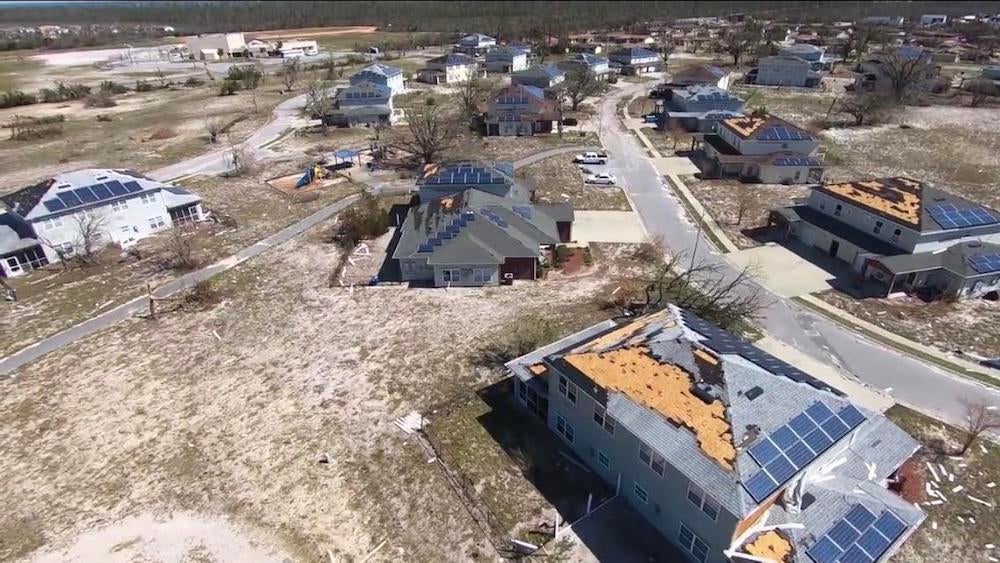 Elisabeth Murray’s house in Coral Gables, Florida, was in the path of heavy wind and rain from Hurricane Irma in 2017. “During the storm, I was worried if the panels would hold up,” she said. “The panels held up fine. As soon as we got power back, I checked on the app [that monitors her solar production]. We were producing again and everything was normal.”

Lori Cunniff reported no problems with her solar system after her home in Merritt Island, Florida, experienced 110 mph winds and downed trees due to Hurricane Matthew in 2016.

In Orange County, Florida, Michael Cohen’s system withstood 60+ mph winds and hard rain during Hurricane Matthew. Not only were his panels unaffected by the wind, but his system actually produced about 4.6 kWh of electricity the day of the storm.

With strict guidelines and permitting, solar installations tend to be made and installed to handle a tremendous amount of abuse from mother nature. Solar systems are designed to withstand wind, hail, and snow. And often, they can even handle seismic activity! Part of the permitting process for new solar installations is to ensure they meet state and municipal building codes and other requirements—for wind resistance, snow-load, and other criteria. These requirements vary by state, local government, and system type and size.Take Florida for example—a state that experiences a high number of extreme weather events.

Most reputable solar installers in the U.S. follow guidelines set by the American Society of Civil Engineers (ASCE). And many municipalities include ASCE’s standard for wind resistance to their building codes.

What about power outages?

We say it all the time: Solar + storage = resiliency. When combined with a battery-capable inverter, battery storage plus a solar installation can enable a home to be self-sufficient after a grid outage.

Kathryn Smith’s battery storage kept her necessary items powered during a grid outage caused by Hurricane Irma in 2017: “I was able to keep my refrigerator running during the day and lost very little food despite being without [grid] power for four days. I was also able to run fans to bring the cool morning air into the house, which kept the house reasonably comfortable and less humid.”

My solar system is saving money and helping the environment. Honestly, it is so easy that it is almost too good to be true but it REALLY WORKS!

I didn’t believe Pat O’Brien when he told me that my electric bill would drop down to zero. For the past three months my bill has been exactly that! Way to go!

Highly recommend Solar Energy World for your solar requirements After building a new energy efficient house in 2014, we had always planned on a solar installation in the future. Our project was a little more complicated since we had a detached garage structure where our electricity comes in, and a backup generator. My salesperson Will […]

Our electric bills have dropped by two thirds. We have highly recommended Solar Energy World to friends.

I’m really pleased with the work of Solar Energy World and the value solar adds to our home.

I love my solar power system. Besides having a warm fuzzy feeling when I think about going green, there are so many benefits to home owners that it almost seems ridiculous not to look into solar energy.

Our solar panels generate 70% of our electricity!

It’s fun to watch our Pepco meter spin backwards. Last summer we paid nothing for our electricity, even with the air conditioning going full blast. We love our solar panels.

I think our solar panels make our home look beautiful. Not only does having solar increase our property value, but it says to our neighbors we support energy independence and care about the environment we leave behind for our children and grandchildren.

We went with the solar system our Solar Energy World Solar Analyst prescribed. I waited a year to submit this so I would have good data and am happy to say our system replaces 64% of our bill (which is even more than he promised!!) and the money from our SREC sales pays the balance […]

In Storms, Solar Holds Up

$0 Down Solar It’s Not Sci-Fi; Solar is Our Most Powerful …

Green Community Why The Pandemic is Not Stopping Our Customers Fro…